Of the three promises contained in the subtitle of Tim Ferriss‘ new book,  The 4-Hour Body, it’s that third one that really grabbed me. 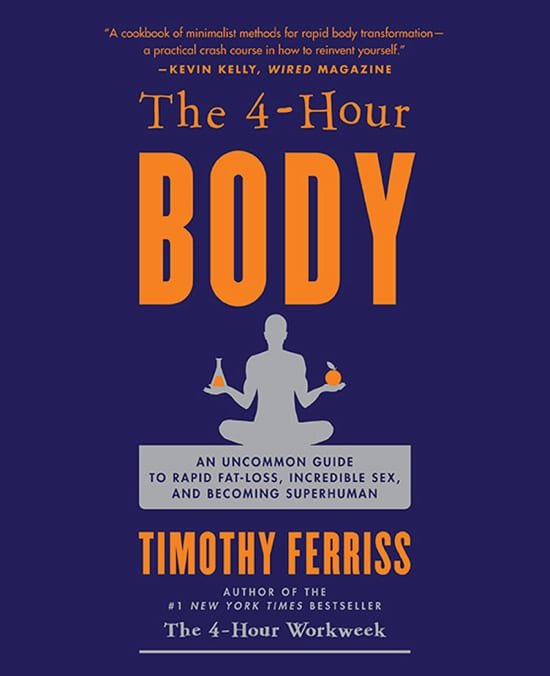 Not that rapid fat loss and incredible sex don’t sound appealing; it’s just that they’re the same promises hucksters have made for eons. Becoming superhuman, though—that’s one place not many marketers are willing to go.

If this were anyone else, I’d never believe it.  But this is the same Tim Ferriss who drastically slashed his body weight to weigh in for the Chinese Kickboxing Championships and qualify for an extremely low weight class, only to put it all back on right away and win the competition by exploiting a loophole that disqualifies fighters who are pushed out of the ring three times in a bout.  This, on only a few weeks of actual kickboxing training.

Given Tim’s track record of doing awesome stuff and the success of his first book, The Four Hour Workweek, I don’t see how anyone with the slightest interest in fitness could resist learning what Tim has done in the realm of creating rapid change in the human body.

A veritable smorgasbord of body hacks

The 4-Hour Body isn’t meant to be read cover-to-cover.  After a few essential introductory chapters, Tim cuts you loose to pick and choose, a la carte, what to read.  (“Thinner, faster, bigger, stronger…which 150 pages will you read?” is the first line in the publisher summary.  The entire book is 578 pages long.)

Here are the chapters I plowed through during my initial, oh-my-god-I-cannot-put-this-down fervor:

The big point you need to understand is that Tim is an experimenter, an empiricist.  He circumvents the red tape and politics of academia and goes straight to people who are getting massive, incredible results.  Then he learns what they do, boils it down, and makes himself his primary subject for observation.

Here are just a few of the cool things in The 4-Hour Body I had never heard before that I can’t wait to try:

If there’s a shortcoming in the book, is that no chapter is quite long enough to really get all the information you want.  Tim generally presents a sample plan for achieving the goal, but I find myself wishing that each chapter could be an entire book.  However, there are tons of links for learning more at the end of each chapter, and I’ve found everything I’ve needed by following these links to go more in-depth.

What vegetarians should know about The 4-Hour Body

Tim Ferriss isn’t vegetarian, but he treats it like any other diet worth experimenting with and gauging results.  He provides several case studies, one of which is that of vegan ultrarunning god Scott Jurek.  (To me, the detailed listing of Scott’s one-week grocery list alone makes the book worth the price.)

The main reason Tim isn’t vegan, he says, is that he has found no culture that thrived on a purely plant-based diet.  But it’s not incompatible with any of the hacks in the book, even if access to animal products would certainly make it easier to double or triple testosterone levels for muscle building and sexual enhancement, another one of Tim’s experiments in the book.

In “The Meatless Machine II: A 28-Day Experiment,” exercise and nutrition coach John Berardi, PhD puts veganism through an unbaised test, not grounded in any morals but simply to judge its suitability as a diet for athletes.  His conclusion is that veganism is sustainable even for those whose goal it is to gain muscle, though he warns that supplementation makes it more expensive than a diet that includes animal products.  (I actually learned a lot about potential deficiencies that I wasn’t previously aware of.)  Berardi also makes the encouraging observation that vegans generally take the time to learn much more about their food and where it comes from than omnivores do, so that the increased effort required to eat a plant-based diet may actually be a good thing.

Last year around this time, I wrote a post called Two Inspiring Books for the New Year.  This year, The 4-Hour Body gets that nod.

I’m sure it’s not for everyone, especially those who like to play by the rules.   As a big fan of fitness and diet experiments, I realize this this book is particularly suited to my tastes more than it will be for others.  But if you’re looking for something to shake things up, to get you out of a rut created by the same old principles you always hear about, The 4-Hour Body is it.