Ok, ready for this?  It’s a fun one, because it involves:

(a) rolling things up into little southern-goodness-bombs and

(b) making your own barbecue sauce, something I’d never done before.

Today’s recipe is from Veganomicon, my featured cookbook of the month.  Which, by the way, is really starting to grow on me: Many of the recipes are a little more complicated than what I’m used to, but the recipes and notes are so well written that I feel like I learn something new every time I make one of the meals.  (Example: “The basic components of a BBQ sauce are something sweet, something sour, and something tomato-y.”)  And the tone of the writing is funny and friendly, without being annoyingly witty or cloying.  As if the PPK needs any of my encouragement, nice job, PPK.

Proof that leaf wraps don’t have to suck

I’m always wary of recipes that require wrapping the main event in some sort of leaf — lettuce, cabbage, or otherwise.  I guess I associate them with that idiotic low-carb craze where we all shunned tortillas and rolls in favor of animal flesh and heart attacks.  And if needless death doesn’t get you, then surely that fact that lettuce leaf wraps always fall apart will.

But not these.  Wrapped in collards, these little flavor bundles stay together really well.  And what exactly is inside said flavor bundles?  Mushrooms, black-eyed peas, chopped collards, and the star of the show — homemade barbecue sauce!

Before you ask: Yes, you could substitute a store-bought barbecue sauce.  But what fun would that be?  Doing it yourself is far more badass (and the sauce is probably spicier, unless you have the barbecue otaku and have some blazing specialty BBQ in your fridge).

When, in the end, I tested my sauce for flavors, I ended up adding some more vinegar and salt.  And in hopes of not killing wife and unborn baby, I started with half the crushed red pepper, and it’s a good thing I did.  The sauce was plenty spicy, even for me, and I like spicy stuff.  Just a warning.

Alright, enough of my yacking.  Here’s the recipe.

(And leave me a comment, because I’d love to know how others like their barbecue sauce.  I’ve always been a vinegar-based guy; that’s the stuff my friend and I embarked on that moronic 7-hour hajj to the Outer Banks one night to get.  But this recipe has shown me that vinegar and tomato can more-than-peacefully coexist.) 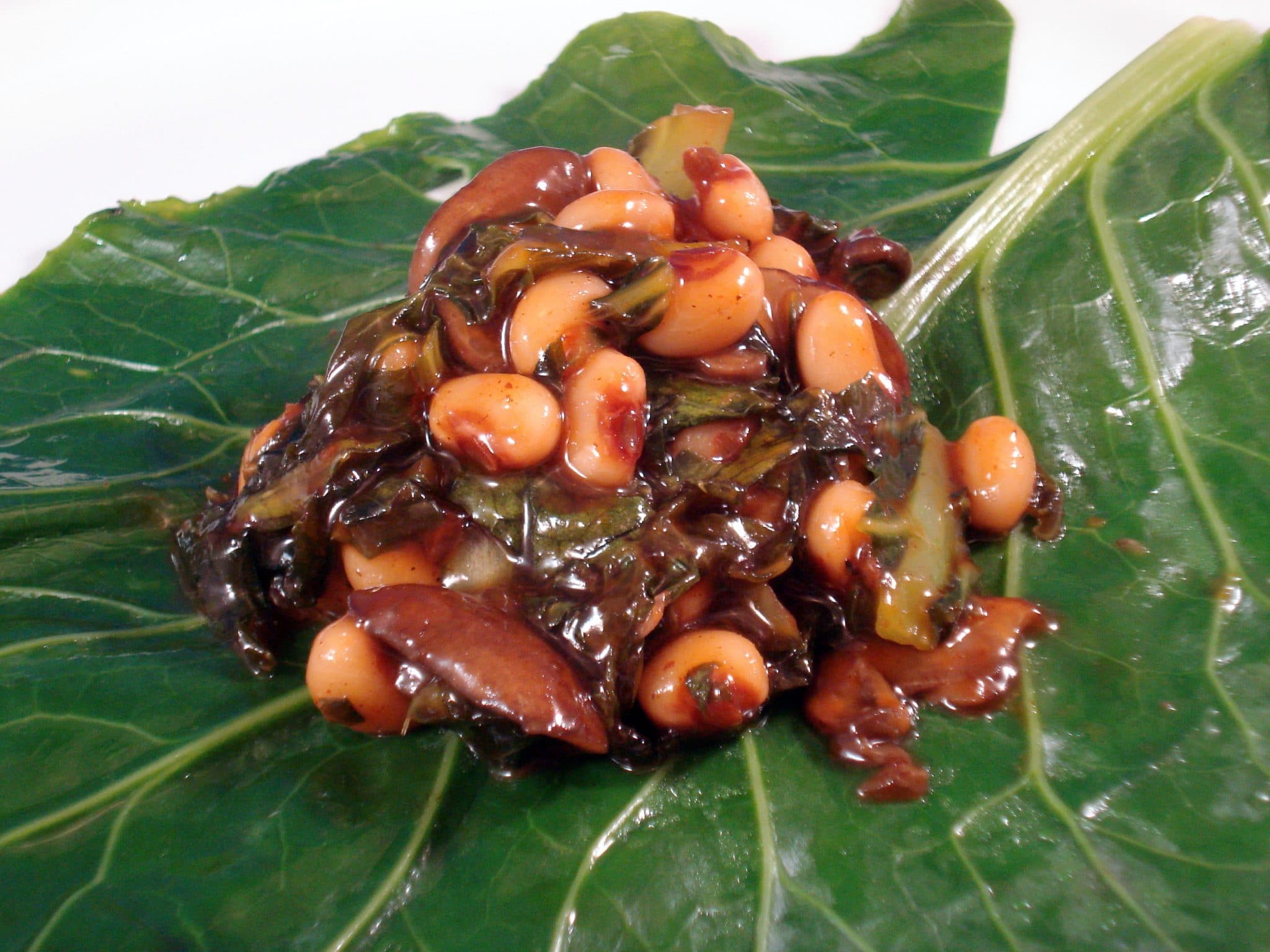 (reprinted from Veganomicon with permission)

Bring a large pot of water to a boil.

When the water is boiling, submerge the collard leaves and cover for 6 minutes.  When done, use tongs to transfer them to a strainer and let cool.  Handle them gently so that they don’t rip.

Preheat a large skillet over medium heat.  Saute the mushrooms in the oil for about 5 minutes, until softened.  Add the chopped collards.  Cook for 7 to 10 minutes, or until most of the moisture has cooked off.  Add the black-eyed peas and cook through.  Pour on 2 cups of the BBQ sauce and cook for about 5 more minutes.  If it looks watery, turn the heat up a bit and cook a few more minutes.

Let cool just a bit so that you can make the rolls without burning yourself.

Place a collard on a flat work surface with the side that has not been sliced facing you.  Place about 2 tablespoons of the black-eyed peas and company in the lower third of the collard.  Fold the bottom up over the mixture, then fold in the sides.  Roll the collard up, gently but firmly.  If the filling is spilling out, remove some of the black-eyed peas and try again.

Continue rolling the remaining collards.  When ready to serve, spoon extra BBQ sauce over the rolls.

Preheat a saucepan over medium heat.  Place the onions in a pan and saute the oil until browned (about 7 minutes).  Add the garlic and saute for another minute.  Add all the other ingredients except the mustard and liquid smoke, and cook for at least 30 minutes and up to 1 hour, uncovered, stirring occasionally.  Lower the heat if the sauce begins to splatter everywhere.  Add the mustard and liquid smoke, and taste for sweetness/sourness.  Adjust the flavors if you think it’s necessary, and cook for 5 more minutes.  If you like a smooth BBQ sauce then puree it, but that’s not entirely necessary.