A Veggie Twist on a Rachael Ray Classic Back when we still ate white meat, Rachael Ray’s Tex-Mex Grilled Chicken Caesar Salad was one of our go-to meals.  It’s from 365: No Repeats

, the book that started it all for me in the kitchen.  Literally, I would help myself to thirds and fourths of this salad, every single time!  The homemade parmesan croutons are irresistible, so clear your schedule for this one; you’ll be at the dinner table for a long time.

Needless to say, this is one of the meals that made me sad to think that I’d never get to eat it again once I went veggo.  That was, of course, until I discovered what a great chicken-substitute tempeh is (longtime readers might remember such NMA classics as Buffalo Tempeh Wraps).

Rachael’s salad actually took a little more tinkering than just swapping tempeh for the chicken to make it totally veggie friendly, since it also contains anchovies (most caesar salads do) and Worcestershire sauce (anchovies again).  But that wasn’t too big a deal; I substituted kalamata olives and a little salt to replicate the briny taste of anchovies, and used soy sauce and a splash of vinegar to replace the tangy Worcestershire.

And guess what, it turned out great!  I really ought to just wing it in the kitchen with substitutions more often.  Erin and I rated Southwest Tempeh Caesar another solid 4 cows out of 5.  Give it a try, you won’t be disappointed.   And for you  meat eaters, I’d be lying if I said the original doesn’t measure up to my veggie-version.  But for that recipe, you’ll have to pick up a copy of the book and contribute to Rachael’s empire.  I’d say just get out of your box and try a meatless meal tonight! 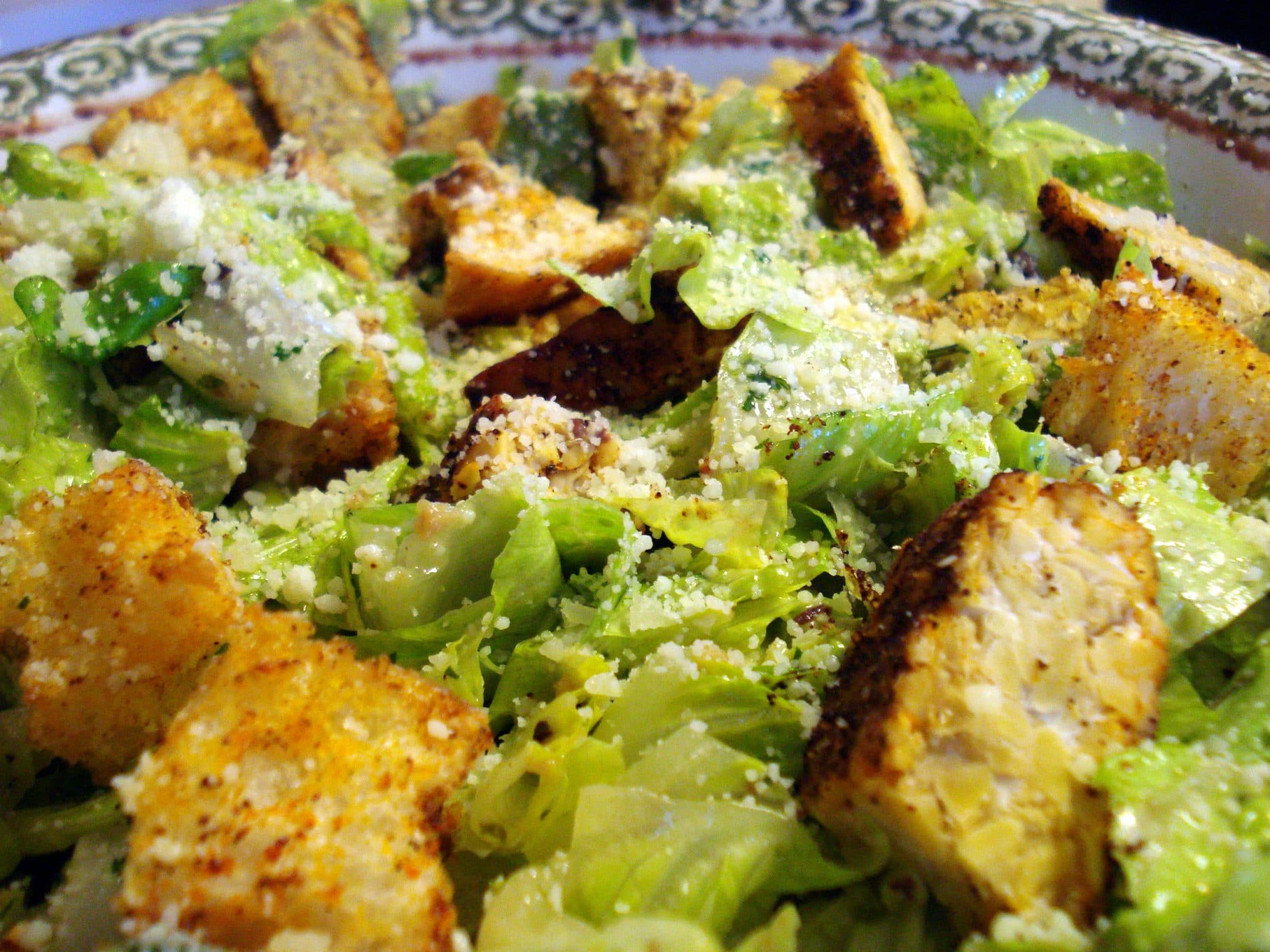 First make the croutons: Preheat the oven to 375 degrees.  Rub the inside of a large salad bowl with the halved garlic, then put the bowl aside.  Throw the halved garlic clove, along with the cubed bread, into another large bowl and drizzle a little less than half of the canola oil over it.  Add 1 Tbsp chili powder and half the parmesan cheese, and toss the bread to coat in the mixture.  Bake on a cookie sheet for about 10 minutes or until they’re as crisp as you like them (I like to leave the croutons just slightly soft in the center). While the croutons bake, prepare the dressing:  Add about 5 Tbsp of canola oil to a pan over low heat.  Add the chopped olives, the red pepper flakes, a pinch of salt, and the minced garlic.  After a few minutes, mash the olives into the pan with a wooden spoon to help them dissolve somewhat.  Let the dressing cook for about 5 minutes, then remove from heat.  Keep an eye on the garlic to make sure it doesn’t burn!

Preheat a grill on medium-high.  Add the rest of the chili powder, the cumin, 2 Tbsp canola oil, and a half teaspoon or so of salt to a shallow dish.  Mix together, cut the tempeh into three or four blocks, and coat in the mixture.  Place each block on the grill until heated through and slightly marked, about three minutes per side on my grill.  Cut into slices once it’s done.

Cut open and dice the avocado.

Get the salad bowl you set aside earlier and add to it the zest and juice of the limes (you may want to use slightly less juice and add more if needed at the end).  Add the mustard, soy sauce, cilantro, and salt and pepper to taste.  Add the oil-olive mixture from the pan and whisk everything together.  Add the chopped romaine lettuce, then the croutons, avocado, grilled tempeh, and the rest of the parmesan cheese.  Toss everything together and serve.