This is the post I’ve been looking forward to writing ever since I started this blog. Not because gnocchi are the perfect marathon training food (they’re not), but because they’re the food I’d choose to have if I were to hypothetically contract Swine Flu and be quarantined, a la Serious Eats and relishments.  Gnocchi are the food that turned me into a cook after I first tasted them in Italy with a glass of Chianti and was compelled to recreate the experience at home.  But after my first attempt at them, it’s a wonder I remained a cook.  Not only did they take all afternoon; they were terrible.

Mario Batali puts it best when he says gnocchi are “excellent when executed perfectly, heinous any other way.” Overwork the dough and they come out heavy and gummy.  Underwork it, or don’t use enough flour, and they’ll dissolve in the boiling water while cooking.  I’m sure more than one Italian grandmother (nonna, right?) has said something like “Good gnocchi melt in your mouth, not in the pot,” before disciplining her young protege on the insert-Italian-word-for-ass with a wooden spoon or rolling pin. 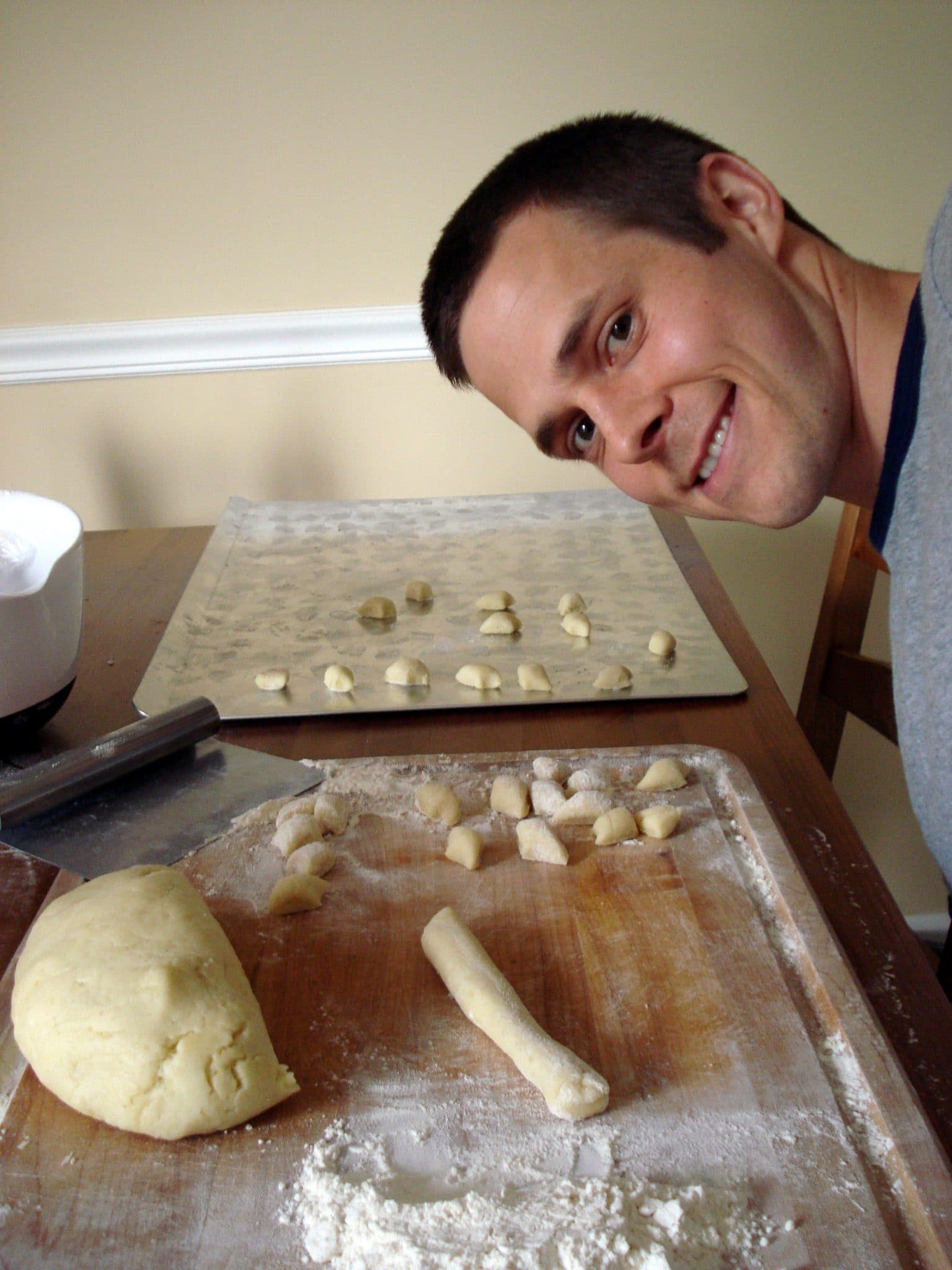 For those who don’t know, gnocchi are little potato-pasta dumplings, and the most comforting food I know of.  The irony is that such a heavenly food was probably born out of necessity, when potatoes were cheaper than the flour used in most other pastas.  For such a luxurious food, gnocchi aren’t unhealthy at all; the main ingredients are potatoes and a little flour, and (optionally) egg.  I only say that they’re not the perfect fuel for marathon training because I generally try to get a little more nutrition in each meal than gnocchi can offer.  And gnocchi are one food I don’t dare desecrate with whole wheat flour.

I served these gnocchi with a simple tomato sauce made with olive oil infused with garlic and basil.  In the past I’ve tried fresh pesto, a smoked mozzarella and olive sauce, lamb ragout and Rachael Ray mini-meatballs (before seeing the no-meat light), and most famously, a cauliflower-gorgonzola cream sauce.  Not really famously, just most famously.  And all of them have been outstanding.

This was the first time I’d ever made gnocchi without eggs. A friend of mine recently explained to me that since the eggs we eat are unfertilized, my likening their consumption to chicken abortion was completely idiotic.  That’s how informed a vegetarian I am.  So I’m no longer opposed to eating eggs, but I had already done some research and found that some people think gnocchi are even lighter when cooked without eggs, so I gave it a try.  And though I had to work the dough a little longer to get it to stop crumbling, there really wasn’t any appreciable difference in the finished product. I don’t see any need to rate gnocchi in terms of cows.  For me gnocchi are a 5 out of 5 anything. I guess the sauce dictates whether the meal will be divine or just really good.  This one was a solid 4.5.  I’m not going to give the tomato sauce recipe here since it still needs some tinkering; to try your own just remove and discard as much liquid as you can from some ripe or canned tomatoes, cook them over medium heat until they soften and break down (30 minutes to an hour plus), and add some olive oil that you’ve flavored with whatever you like and cook until the sauce becomes whole.  But I will do my best to describe in detail how I make the gnocchi.  I really recommend that you try it, just be willing to make a few mediocre batches before they get really good.

By the way, I first learned to make gnocchi from what is now my favorite cookbook, The Greatest Dishes by Anya Von Bremzen.  It features 80 recipes for the most classic dishes from around the world, and it’s my absolute go-to when I’m looking to try something new or cook something really special.  I’ve made incredible lasagna, risotto, and pesto dishes from it (can ya tell I love Italian cooking?), and they’ve become my sort of “signature” dishes, as far as my friends and family are concerned!