Well, after two consecutive days of gnocchi-making (I had to make an extra batch to bribe Pete), I was pretty tired of cooking.  So I haven’t made anything much over the past few days, and usually that’s a recipe for diet disaster.  But I found some healthy premade foods in the store that we’ve managed to subsist on for the week! 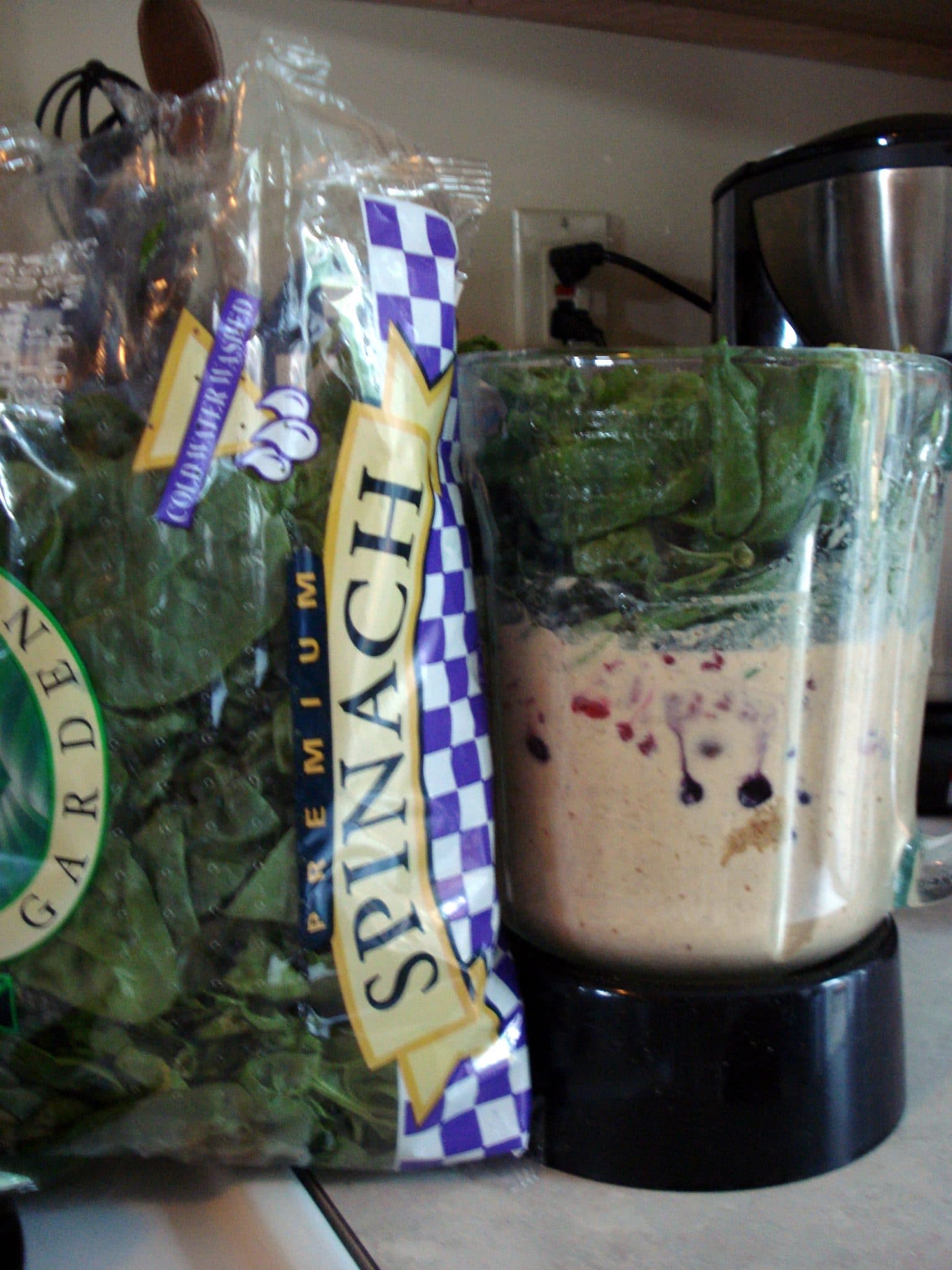 I’ve been starting the day recently with some greens in my smoothie. Such an easy way to get a salad each morning!  I got some spinach this week, which only costs $1.79 for a ten-ounce bag, so it’s both cheaper and better-tasting than the spring mix I had been using.  And probably more nutrient-dense, since the leaves are much darker.

Lunches this week have been leftovers, plus I tossed Barilla Plus pasta in some pesto that we made from our garden and froze last summer.  This frozen pesto has been good throughout the winter and spring on days when we don’t feel like cooking, though it doesn’t have all that wonderful freshness that it does when you eat it just a few hours after picking the basil. For dinner on Monday night, we had this pizza I found at the grocery store.  Normally I don’t even consider buying frozen pizza, but this one had so few ingredients that it seemed like a decent choice for a no-cook (well, almost) night. Most of the time this stuff is loaded with fake crap, but check out this ingredient list: soft wheat flour, water, salt, sunflower seed oil, brewer’s yeast, tomato sauce (made from tomatoes, water, EVOO, salt, sugar, oregano), mozzarella cheese, mushrooms, red and yellow peppers, artichokes, black olives, permesan cheese.  That’s it!  Nothing your grandmother wouldn’t recognize! Yes, it’s white flour, and there’s a good amount of saturated fat from the cheese.  But I don’t mind that once in a while, as long as I’m getting it from real food. To add some green to the meal, I made grilled romaine lettuce hearts, something that I found through Foodbuzz (yay sponsor!) on a blog called Grillin’ Fools. I know I said I wasn’t cooking, but this took literally two minutes of work.  And they were really good.  Somehow the grill adds this really beefy flavor (to lettuce?!), and I can see this being awesome with a steak or burger, if you’re into that sort of thing.

I added a glass of Zinfandel, and my makeshift meal was complete! The next night, I did a similar thing– frozen Italian food with some greens.  The greens this time were the arugula version of my favorite salad.

And this time the Italian food was Nature’s Promise cheese ravioli. I was even more excited about this ingredient list than the pizza’s: organic grass-fed whole milk ricotta, organic wheat flour, water, organic cage-free whole eggs, sea salt, organic parsley, organic black pepper.  That, my friends, is a killer (in a good way) list for a frozen food. And from the store brand, no less!  Again, made with white flour and a little fatty, but also again, from whole, real foods.  We had it with some organic tomato sauce and some whole wheat french bread. Finally, while I was looking for ravioli, I found another one that I wanted to try.  Fresh, whole wheat, cheese ravioli from Buitoni, which we had last night.  The fact that something can be called “fresh” when its use-by date is July 12 should have tipped me off that it isn’t food. This was really the worst meal of the bunch, nutritionally and gustatorily.  Yes, it’s 100% whole-wheat, but a closer look at the ingredient list reveals three kinds of gums, hydrogenated soybean oil, corn syrup solids, and more yucky fake stuff.  And it still gets away with saying “Made from natural ingredients”!  If I’d have noticed this in the store, I wouldn’t have bought it.  Maybe the nutrition facts look good, but you know what I think about those.  The ingredient list is far more important.   And it comes through in the taste.

Until next time, no fake food!