If our first two running group successes, Miami and Virginia Beach, have been surprises, our third is a complete shocker. Oklahoma City … that’s beef country, isn’t it?

But continuing on the theme of our other successful groups, the lack of vegan options and activities nearby makes for strong, tight bonds among NMA OKC’s members.

In fact, the first time I met some of them wasn’t in Oklahoma City but at the Marshall Healthfest in Texas, to which three members (Gina, Jon, and Kaitlyn) had driven together — for six hours each way.

The point was driven home when I visited the group in Oklahoma earlier this year and several members told me things like, “Before this group, I had never met another vegan in person.” Or, “I hang out with my NMA friends more than I do my other friends now.” Several of our other running group leaders have been frustrated by the difficulty of getting more than a few members to show up for runs when they see other groups getting 20 to 30 people for their biggest events. Here’s the thing, though: OKC doesn’t get huge numbers either, but makes it work nonetheless.

So how do they do it?

Gina Stone, the leader of the OKC group, says:

I had no idea what to expect when I scheduled the first run in October. Honestly, I was fully prepared to run by myself that first day. As it turned out, five people and one puppy showed up!

We’ve continued to meet every Sunday since then. Although we have about 137 members in the Facebook group, participation for our runs is small, ranging from about one to ten runners each week. But the bond we have with one another and the commitment of our regulars is strong.

It was so easy for us to connect each Sunday because we were just thrilled to finally have a conversation that didn’t involve us defending our protein intake. We have an amazing group of people who probably would not have ever come together had it not been for the NMA running group.

While the turnout varies each week, a few members form a rock-solid core that’s consistently showing up for runs and other group events. Another group of more casual members rotates in and out.

And it seems like it’s been that way since the beginning:

Even though I’m the one that creates the event on Facebook and “shouts” directions as we meander through downtown each week, this group would not be what it is without the initial enthusiasm, support, and participation from Kris, Jonathan, Nelly, and Emily. As the group grows, we continue to acquire new, committed “regulars” who add layer upon layer of awesomeness to the runs and the veg scene in our city.

It’s the people that make this group rock, no doubt. There is no better feeling than blazing through the odious Oklahoma weather every week with a mighty tribe of paradigm-busting, compassionate, inspiring athletes.

Every week I scan through the photos that our running groups post in their Facebook groups, and early on, OKC stood out. It wasn’t that they had huge numbers, just that every single week, a few people turned out. One low-turnout run didn’t mean the end of the group; they’d just have fun and show up again the next week.

Our group is consistent, welcoming, diverse, and reliable. We meet at the same time, relatively same spot, run the same course, and encourage all levels of ability and plant-based eating to join us. In a place like Oklahoma, it is easy to be a vegan freak, but it’s even easier to latch on to those individuals who share your unique beliefs and lifestyle.

What Makes It Work

In a nutshell, it’s:

I had no idea what a blast I’d have visiting this group in Oklahoma City. I’ve harped on the closeness of the friendships a lot here already, but it took actually hanging out with them for a weekend to fully understand how powerful a factor this is.

The day I arrived, we had delicious almond milk cappuccino at Elemental Coffee, then pizza and beers while we waited out a tornado warning. The next day it was hot yoga and a visit to Mim’s Bakery, a vegan food truck run by Emily, a member of the group. And of course, the obligatory stop at the Flaming Lips’ museum for the official photo during our run, before enjoying one more meal out at one of just a few vegan-friendly spots in town.

As unlikely as it might seem in the heart of beef country, this group made being a vegan in OKC for a weekend a blast. Limited in options, sure, but amazing people to share the journey with — people who “get” you and want to see and be a part of real change for their city.

If any one factor is the reason for their success, that’s it. 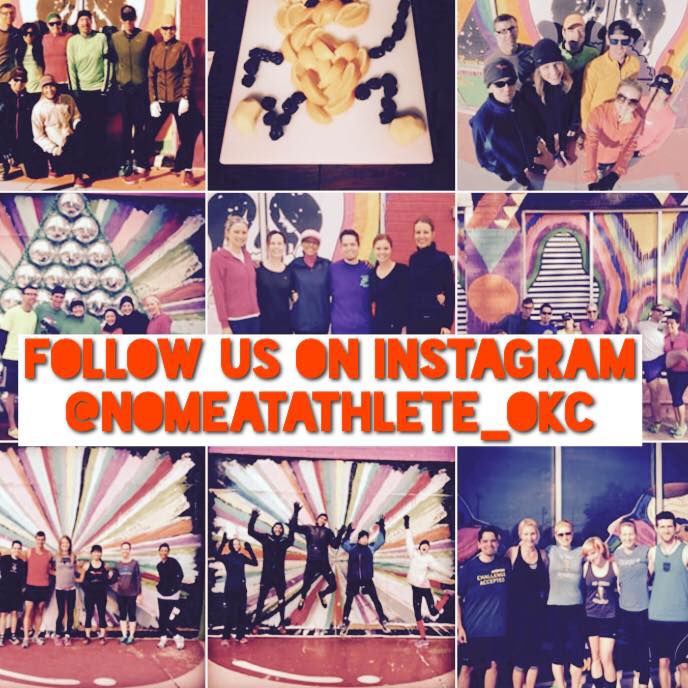 Haven’t run with your city’s NMA group yet? Check out our full listing and get on it! And if it doesn’t exist in your city yet, why not be the one to start it?