Behold: Vibram FiveFingers, the first article of clothing I’ve ever felt the need to put in quotation marks. 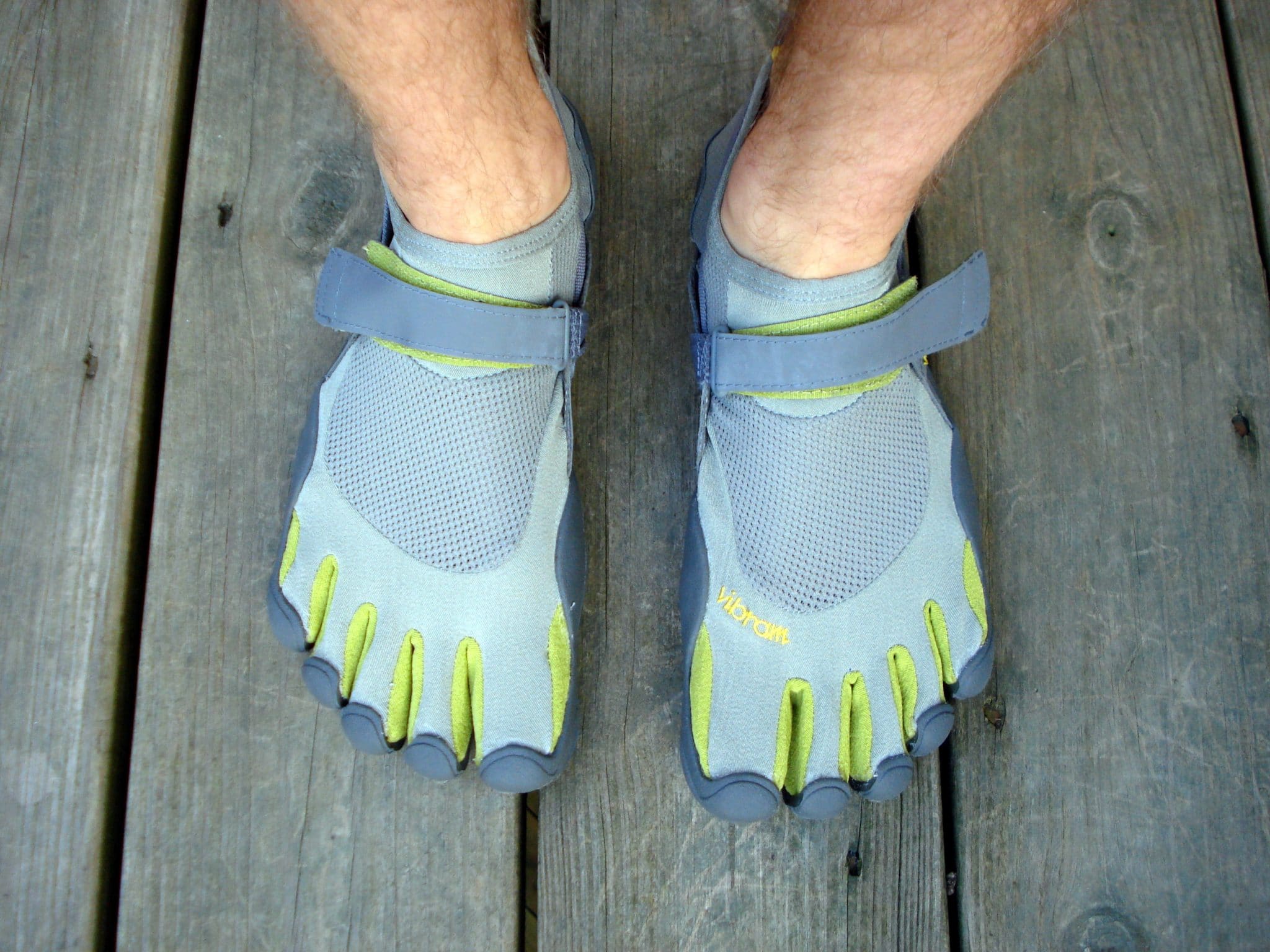 A while back, I wrote about barefoot running and my interest in trying it, but I was hesitant to mess with anything before my attempt to qualify for Boston.  Having done that successfully, as well as having gotten all worked up about running like a tribesman after reading Born to Run, I went ahead and bought this pair of barefoot-simulating shoes as a little BQ-present to myself.

My first thought was that I’d buy the Nike Free, but lots of people recommended Vibram FiveFingers instead, since they have even less cushioning than the Free.  But why, you ask, would I want less cushioning, when running shoe companies have been telling us for years that more is what we need? The rationale behind the barefoot movement — and make no mistake, what I’m doing is not the same as barefoot, but similar — is that Mother Nature knows better than Nike or Brooks about what has to happen for us to run most efficiently.  According to studies cited in Born to Run, 65-80 percent of runners are injured every year.  If you’re a runner, this isn’t that surprising.  What’s shocking, though, is that injury rate is directly correlated with running shoe cost — the more expensive and more “advanced” the shoe you’re running in, the more likely you’ll be watching your next race from the sidelines.

The problem, it seems, is that the comfort provided by all that cushioning comes at the cost of environmental feedback.  In other words, you can run sloppily, in a way that isn’t healthy on your legs, without feeling (at first, anyway) the pain you’re supposed to feel from it.  Take off your shoes and run barefoot, though, and your form immediately improves; all the sudden it hurts to take those big strides and land hard on your heels like you could with a high-tech running shoe on your foot.

And finally, all that support provided by modern running shoes allows your feet to get lazy.  Kick those shoes off and run, and now those little muscles need to work.  And as they work, they get stronger, the way they’re supposed to.

In case you can’t tell; I’m pretty high on this idea and these new “shoes” of mine.  But it’s a cautious optimism.  By choosing which studies to cite, you can make a pretty good argument for any case you want.  Born to Run seems to be drinking the barefoot Kool-Aid, so to speak, and I’m sure there are some pretty good arguments out there against barefoot running too.  But I find the idea fascinating, and for me it’s worth a “trial run.”  (Sorry, that’s a bad one.)

I just got back from my first run in these bad boys, a little one-miler around the neighborhood.  You’re supposed to ease into this new way of running, since, as I mentioned before, those muscles haven’t had to work in a long, long time.  And I also plan on wearing them mostly on the track and trails, not roads.  The same logic that says we’re meant to run barefoot says “cavemen didn’t have paved roads.”  Nonetheless, it was a nice little run, and I could immediately tell that I had to run differently than I do in my normal shoes.  And I felt every little rock I stepped on; the hard rubber on the bottom really only protects your feet from the scraping of the road.  And that’s exactly the point.

So there you have it: why I am wearing such a ridiculous-looking shoe.  I’ll keep you posted on how it goes as I increase my almost-barefoot  mileage!