The blog Zen to Fitness caught my eye with a post called Four Healthy Alternatives to Chicken.

“Yes!  The idea that factory-farm chicken is pretty gross and completely unhealthy (fecal soup, anyone?) is spreading to the non-vegetarian community!”

Not quite.  The four alternatives — rabbit, venison, bison, and quail — are suggested as ways to expand your menu, under the tacit assumption that chicken is pretty healthy, but these are just as good for you and offer some variety in your diet.  To the credit of Chris, the author, I do think that if you’re going to eat meat, these alternatives are better than chicken, if only because they’re more likely to be wild, or at least not mass-produced the way most chicken is.  And the better an animal lives and eats, the healthier it is for you to eat.  Michael Pollan will tell you this. Since the healthy alternatives on Chris’s list weren’t vegetarian, I decided to use the post as inspiration for my own “Four Alternatives” list: four vegan protein sources that aren’t soy.  I have nothing against soy as long as it’s minimally processed, but a lot of people seem to think that’s the only decent source of plant-based protein, when it’s not. (For example, it’s not even included in our plant-based protein powder.)

For a long time, I thought seitan was another soy product.  Turns out, it’s made mostly from wheat.  And it has a texture very similar to meat, earning it the nickname “wheat-meat.”  A four-ounce portion of seitan has between 20 and 30 grams of protein, making it the most densely-packed vegetarian protein source I know of.  That it could pass for meat in a vegetarian dish is pure bonus, even if it’s not quite a whole food. 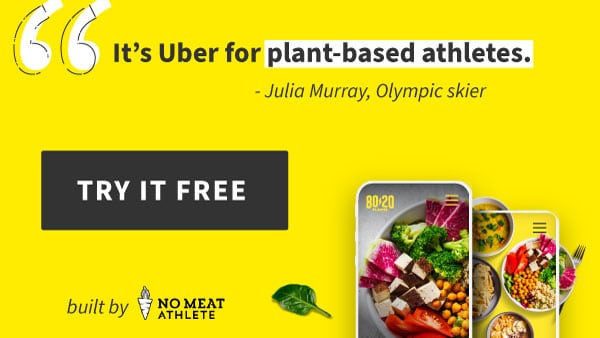 Nothing new here; beans are a staple of almost every vegetarian athlete’s diet.  My favorites are lentils, chickpeas and black beans, but almost every starchy bean contains 12 to 15 grams of protein per cooked cup.  Soybeans, interestingly, contain the most of all (29 g per cup); perhaps that’s why soy plays such a big role in many vegetarian diets.  Lentils, at 18 grams per cup, come in a distant second.

Some call it a super-grain; technically it’s a pseudo-grain.  Quinoa is actually a seed, and it comes in at 11 grams of protein per cooked cup.  It has the benefit of being gluten-free, too.  Quinoa contains a bitter coating that helps it to avoid being eaten by birds, so rinse your quinoa well before you cook it.  (Cooking only takes 12-15 minutes in hot water.)  Quinoa makes a good substitute for rice as part of a high-protein vegetarian meal.

Chances are, you’ve never thought of broccoli (or any green vegetable) as a high-protein food.  But per calorie, vegetables like broccoli and spinach are very high in protein.  The “problem” is that they take up a lot of room in your stomach, so it’s hard to eat enough of them to make them a significant source of protein.  Still, at 5 grams of protein per cup, I think broccoli deserves a place on list, if only because it’s interesting.

This recipe that Christine came up with includes all four of the high-protein vegetarian foods from this post.  (My contribution was coming up with the moniker “wheef and broccoli,” which I recommend you avoid calling it if you don’t want to gross out your friends.)

Okay, so the bean contribution isn’t much—a little bit of black bean sauce only.  But hey, we tried.  This is a tasty meal, the closest thing I’ve ever had to beef or chicken with broccoli since going vegetarian.

Ingredients for the quinoa and stir-fry:

Ingredients for the sauce:

Bring the water to a boil, add quinoa and reduce heat to medium-low.  Let simmer for 12-15 minutes until tender, let stand 5 minutes.  Fluff with fork when ready to serve.

Combine the ingredients for the sauce in a bowl and mix well to dissolve corn starch.  Set aside.

Heat the two teaspoons canola oil in a large skillet over medium-high heat.  Add the seitan, stirring occasionally for 2-3 minutes to brown.  Transfer to a plate and set aside.

Heat the remaining oil in the same pan over medium-high heat.  Add the onion and garlic; cook for two minutes and add broccoli.  Cover and let cook for 5-10 minutes, checking the broccoli until it is crisp-tender.  When it is, add sauce and browned seitan and cook until the sauce thickens slightly.

Serve with additional soy sauce and Sriracha sauce if desired.