As runners, we have all kinds of convenient excuses to not do any strength training.  Some of my favorites:

I’ve used all of these at one time or another.  As a result, I’ve just run a lot.  And now I’m scrawny.

As it turns out, most of those excuses are bullshit.  Running does keep you in good shape, but it doesn’t do much for your upper body, appearance-wise or in terms of strength.  And while it’s probably true that when you first start out with weights, injury is a risk, a friend of mine who recently came in 18th at the Badwater Ultramarathon (yes, that’s 135 miles through Death Valley) tells me that he thinks strength training actually prevents him from getting injured now.

For me, it’s time to get back in shape.  But not just any strength program will do.

3 Things I Don’t Want in a Workout Program

When I ran my first marathon, I was really into lifting.  I was 25 pounds heavier than I am now and most of it was muscle.  Relatively speaking (and greatly exaggerating), I was a beast.

While I don’t want to be that guy again (have you seen his marathon time?), I do want to be stronger.  That means more bodyweight exercises and less grunting and contorting myself into the worst form possible to pound out a 1- or 2-rep set on the bench.

I also don’t want to join a gym.  My wife and I like to workout together, so we’d need a gym that can watch our baby. I’ve found those to be both rare and expensive, so I need something I can do at home with minimal equipment.

And I don’t want it to take a lot of time.  Running is still my focus; anything else is supplementary.  Three days a week is all I’m willing to give to strength training.

Programs to Get You Strong Without a Gym Membership

But I’ve managed to start down the path to getting strong again, without joining a gym or committing more than about three hours a week to strength training.  How?  I’ve found three programs, two of which I’m already doing and treating as a buildup to the third, which I’m going to start shortly after my next 50-miler in Vermont.

So here’s what I’ll be doing for strength training for the next several months.  All are quick, gym-free, light on equipment, and (I think) compatible with ultra training.  That last part remains to be seen.

Please note!  The links to products here are affiliate links.  That means I make money if people buy from them. I first met Steve Speirs at the HAT 50K this March.  I knew him only as a DailyMile guy with a damn fast HAT time; I later found out he was the creator of the 100 Pushups program and winner of the 2009 Cayman Marathon.

Steve believes that the pushup alone can make you a better runner, as it is (surprisingly) somewhat of a full-body exercise, especially as you do variations that focus on core stability.  I just believe that doing 100 pushups sounds badass, hardcore, or both.

While the book is the most comprehensive, the free website and the $1.99 iPhone app both contain full 7-week programs you can use to work your way up to 100.  I’m on Week 2 of the book’s program, and already doing way more pushups than I did the first day.

The best part: Each workout takes literally less than 10 minutes.  5 sets of pushups with a minute rest in between each set.  It’s so little that you can even do it along with another program.

Which brings me to… I credit the the Core Performance Endurance program with turning me into a “serious” runner.  It was with that program, focused on core strength and proper form in all movements, that I developed the stability and muscle tone to stop getting injured so that I could train consistently enough to call myself a runner, athlete, or what have you.  (And it helped me get my marathon under 3:30 for the first time.)

Problem is, my wife and I did that program for so long that we got really sick of the workouts.  So we’ve turned to Core Performance Essentials, which is the same idea, but with new workouts, less required equipment, and crammed into half an hour a day, three days a week.  There are separate cardio days, but I’ll substitute my normal running workouts for those.  And there’s regeneration too, based mostly on foam rolling, the goal of which is to keep your muscles soft and pliable.  Trust me, you can feel that it’s working (i.e. it hurts).

We’re starting the second week of Core Performance, and progressing quickly through the workouts.  It’s time-based, so you move to the next workout as soon as you can complete the circuits in the previous one within the 30 minutes.  I suspect in 8 or 10 weeks we’ll have reached the end, at which point I’ll be ready for…

Equipment needed: dumbbells or stability bands and a pullup bar 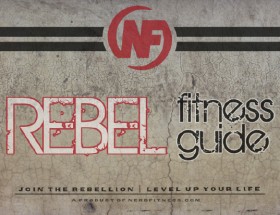 I recently discovered a site called Nerd Fitness, whose goal it is to “help fellow nerds, desk jockeys, and average Joes level up their lives while still doing the stuff they love.”  It’s the type of stripped-down approach to fitness for busy people that’s right up my alley.

Steve, the owner of Nerd Fitness, recently released the massive Rebel Fitness Guide.  It contains six different workout routines, which you move through at your own pace (Steve recommends spending four to eight weeks with each).

The Rebel Fitness guide is actually aimed at people looking to lose weight, which I’m certainly not.  So how come I can’t wait to get started?

Because the exercises are awesome.  Crazy stuff I’ve never done.  All different kinds of squats, lunges, pushups, pullups, kicks and other bodyweight exercises, plus a few with dumbbells or bands.  Organized into supersets and circuits for speed and efficiency.  And complete with interval training after most of the strength workouts.

I just don’t see how you could do this stuff and not get strong.  And yet the program doesn’t involve huge weights, which is great, because I’m still not sure that heavy weights and ultramarathon training can peacefully coexist.

Like I said, the program is massive.  I can’t begin to tell you about all the stuff that’s included, but you can check out Steve’s site to learn more and even see a free preview of the guides.

Vegan month is on!

Oh yes, I’ve been eating vegan for seven days now.  Eating at home has been simple—almost no different from how I ate at home anyway, minus the honey.

Eating out has been tougher, but twice I’ve eaten out and been fine.   However, at two parties already I’ve eaten dairy.  It was served to me as part of a meal that was prepared specially for my wife and me as vegetarians.  And, quite frankly, I refuse to be the guy who turns down vegetarian meals that people were considerate enough to make for me.  I suppose I need to do a better job of communicating that I’m trying the vegan thing this month.

How’s is going for those of you who are trying out a vegan diet with me?