Thanks for all your help (and sympathy) about my terrible run and what might be to blame for it.  It’s hard to tell whether it was dehydration, electrolyte imbalance, low blood sugar, or this idea about the brain getting overstressed and shutting down its signals to the muscles.  Luckily, I don’t really need to pinpoint the exact cause—all of these things are easy to fix.  Hopefully you won’t be reading another post like that anytime soon!

I’ve been loving the raw vegan meals recently, but you gotta treat yourself once in a while, right?  We got the new Fine Cooking in the mail last week, always good for a tug-of-war as Erin and I both clamor to read it.  The big feature this month is about homemade tomato sauce, and as a suggested use, they provide this grilled pizza recipe. As much as I love a classic margherita pie, this one’s not traditional at all.  It’s covered with portobellos, onions, and most noticably, tomatoes and arugula.  It’s the kind of pizza you’d eat outside with a fork and knife at a trendy bistro in the city.  Of course, we slummed it and skipped the fork and knife.  But man was this good pizza!

Erin and I teamed up to make this one; it’s kind of a lot to do by yourself.  And we deviated from the recipe a bit.  First, we didn’t make homemade tomato sauce.  I’m sure this would have been best, but our garden has still not produced any red tomatoes, and using your own tomatoes is half the fun!  So I bought Nature’s Promise organic sauce and just used that instead.  Also, we used a few green heirloom tomatoes (our garden has plenty of these) for the topping; the recipe calls for yellow, purple, or orange ones.  They must be smoking something over at Fine Cooking, because the only tomatoes I ever see are red or green.  And we pre-grilled the green tomatoes, since they were a little firm.

We did make fresh dough, but you know me; I wasn’t about to use all white flour.  So of the four cups of flour called for, I used one cup of whole wheat flour, one cup rye flour, and two cups white bread flour.  And this crust turned out really nicely.  Surprising for two reasons—the recipe calls for rapid-rise yeast, which most say doesn’t allow the yeast enough time to develop nice flavor, and it’s the type of pizza where both sides get grilled, not something I’ve had good results with in the past.  But I had faith—Fine Cooking recipes, almost without exception, work out—and the crust got nice and crispy on the bottom, with the perfect amount of chewiness in the middle. 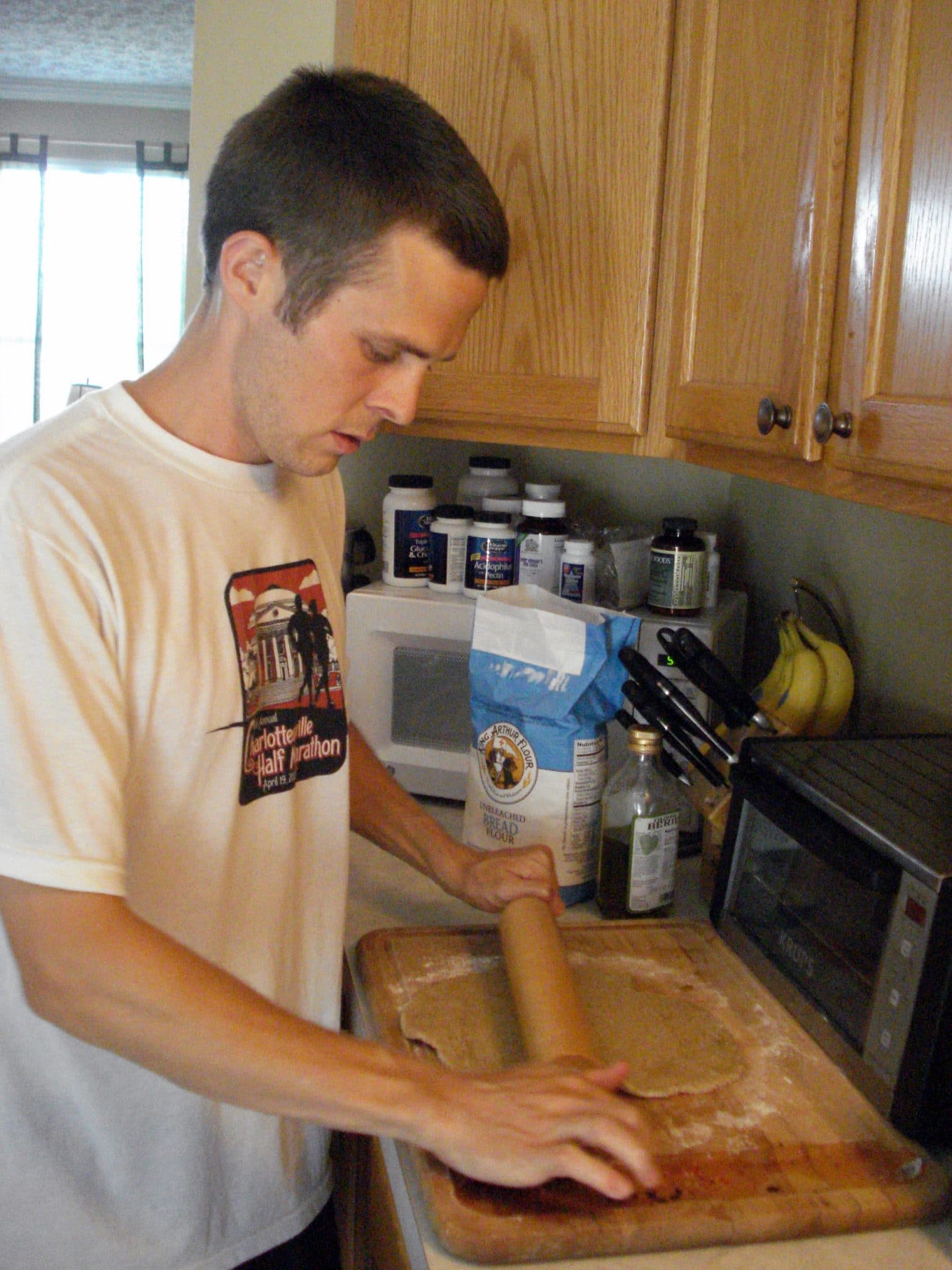 Two things really made this pizza for me.  The first was the cheese, which was Fontina.  As an aside, when I glanced at the recipe before shopping for ingredients, I saw that it said to roll the dough into a 10-inch round.  This sounds sort of small, so I figured we should make a double recipe so that we’d have leftovers.  What I didn’t realize was that the recipe makes four of these pizzas!  We had leftovers, alright.  The point of this story, though, is that the second time, I used mozzarella cheese, and it just wasn’t the same.  So don’t do it; get Fontina.  The other thing I loved was the drizzling of olive oil and balsamic vinegar at the end.  It just provided that extra touch that put this pizza in the “gourmet” category rather than the “homemade Papa John’s” category. I could go on for a while about this pie, but this post is getting much longer than I like, so I’ll just leave at that.  And this.  Five cows out of five! It was perfect!  Do yourself a favor and try this recipe (and do it soon, because Fine Cooking tends to take away online access to the new recipes pretty quickly for non-members).  And if you’ve never made dough at home because it seems like a hassle, this is the time to try it.  Rapid-rise yeast means only about two hours of rising time.  Come on, do it, all the cool kids are!