Tempted by the Hemp of Another 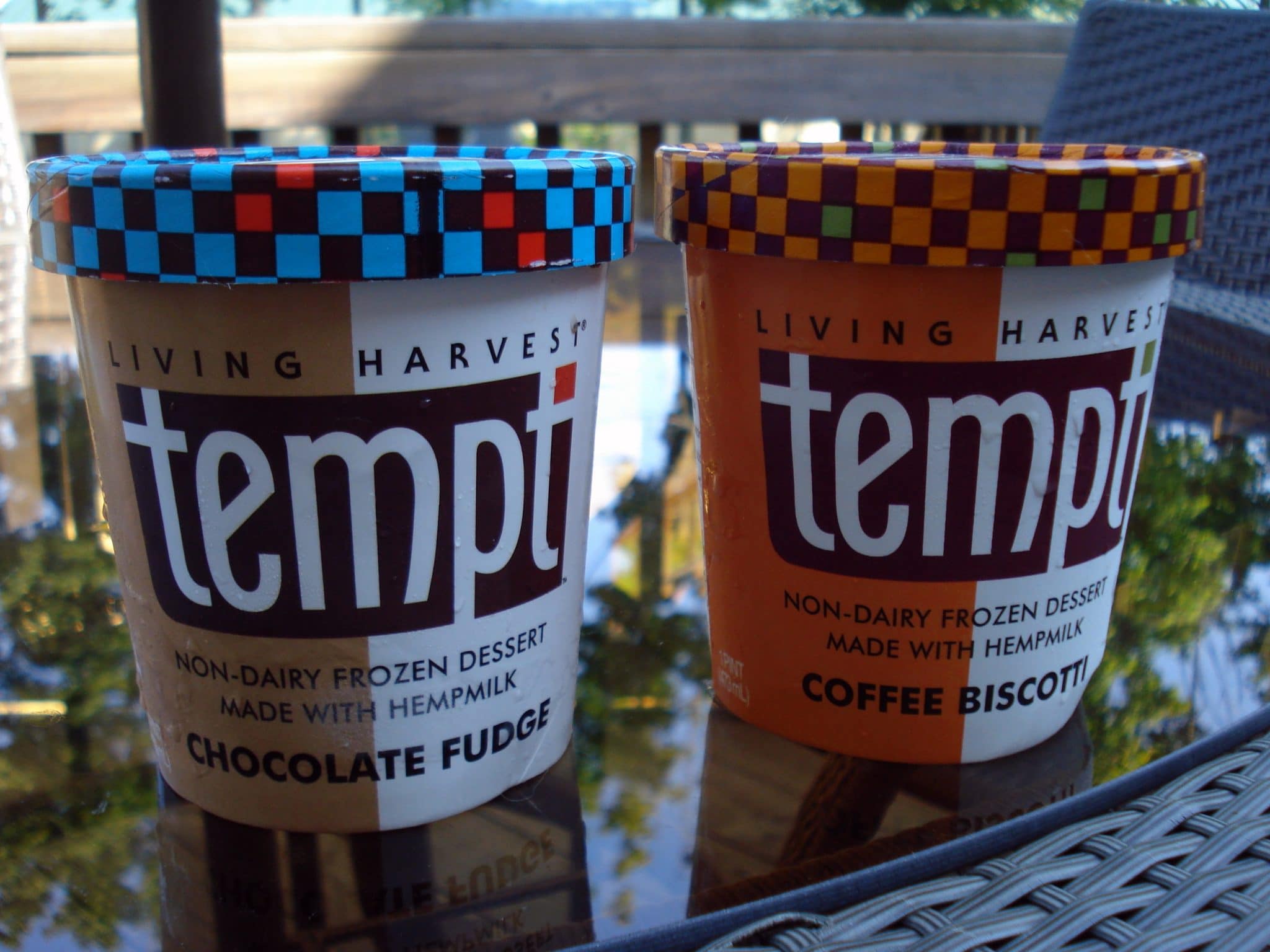 I was recently introduced to hemp products, since they’re so prominently featured in Thrive. Perhaps the best thing about hemp (well, the second best thing about hemp, I’m told ;)) is that it is nutrient-rich as a whole food, so little or no processing is needed to make healthy hemp products.  Hemp is also a source of complete protein, it’s highly digestible, and is much less acid-forming than other proteins.  Long story short: eat hemp stuff! So of course I was very happy when Living Harvest, makers of all things hemp, sent me some coupons to try out their goodies.  In addition to their nutritional products like hemp protein and hemp oil, Living Harvest has a line of everyday foods called Tempt, which includes hempmilk and ice cream made with hemp milk (they call it non-dairy frozen dessert).  I decided to try the Tempt products first (what can I say, they were tempting), and I’ll review the health products in a later post.

Erin and I picked up two flavors of Tempt non-dairy frozen dessert: chocolate and coffee biscotti.  We tried the chocolate a few nights ago, and we were shocked at how good it was!  A very nice, rich chocolate flavor, with texture somewhere between that of frozen yogurt and ice cream.  Then today I tried the coffee flavor, made with real organic coffee beans, after my workout.  Erin abstained, on account of having a baby growing inside her.  Yum!  (The ice cream, not the baby.)  This was right up my alley.  Again, not quite the richness of real ice cream, but very close and still really tasty, on par with good frozen yogurt.

So the ice cream by itself was delicious, but if given the choice, I’ll always choose a milkshake over ice cream.  Now, if only I had some sort of non-dairy hemp product that could take the place of milk in a milkshake.  Let’s see what I can find in my pocket here… Yes!  Tempt hempmilk, how very convenient!  I blended a little bit of this together with some of the coffee biscotti ice cream and made myself one hell of a post-workout non-dairy treat.

By itself, Tempt hempmilk was pretty good too.  Very much like regular milk, just not quite as sweet.  I’m not a vegan, but when I became vegetarian largely for health reasons, I decided that regular milk is not something that I want in my diet.  I’m not a big fan of the taste of soymilk either, so I’ve been using almond milk instead.  But now it will be nice to mix it up a little with hempmilk, which tastes just as good to me as almond milk does.  Nutritionally, Tempt hempmilk (unsweetened vanilla flavor) has 1 gram of protein, 1 gram of carbohydrates, and 6 grams of fat (the good kind, with lots of omega-3’s and -6’s) per serving.

These Tempt products are among the very best products I’ve tried, and I would highly recommend any of them to anyone who doesn’t eat dairy for whatever reason, especially ice cream lovers looking for a non-dairy substitute.  Thanks Living Harvest!

No Meat Athlete Shirts Around the Blogosphere

Check it out, photos of other vegetarian-runner bloggers wearing No Meat Athlete shirts!  First, Caitlin from Healthy Tipping Point wore her yellow one to a Team In Training meeting, who she’s raising money with as part of her training for her first marathon.  As if training for your first marathon isn’t enough of a commitment!  Seriously though, Team in Training is something that I really admire and am going to do someday.  And if you haven’t been to Healthy Tipping Point—wait a minute, what am I saying?  Of course you’ve been to Healthy Tipping Point, it’s one of the most popular blogs around.  I was so happy when Caitlin decided to become vegetarian a few months ago, so that all those readers would see what you can do on a vegetarian diet!

Next up is Lindsay, an avid runner who writes the blog iRun.  Get this—she had a running date (fun, Erin and I did something like that when we first started dating), and decided to wear her NMA shirt on the date!  Just like me, Lindsay is training for an October 4th marathon, the Lakefront Marathon in Milwaukee.  And she’s even thinking of doing one three weeks later.  Crazy!  (Aside: Holy crap, I just went to the Lakefront Marathon website, where they have a countdown. Only 34 days left?! )

Thanks Lindsay and Caitlin, for helping show the world that you can be a bad-ass marathoner without eating meat!