Just like an ultramarathon, it was both exhilarating and exhausting. There were times when I looked at how far I had left to go before I could sleep again in my own bed, and — feeling completely overwhelmed — I did what dozens of ultras and marathons have taught me to do.

And, just like that, I went from city to city for a month and a half. Instead of aid stations, they were hotel rooms. Instead of long hikes up hills, they were 8- and 12-hour drives. And instead of downhills, the fun parts that ended too quickly were the events themselves, where I met hundreds and hundreds of No Meat Athletes and felt anything but alone.

I’ve been back home with my wife and kids for two weeks now. I’ll hit the road next week for two more events nearby (Raleigh and Charlotte, NC), but it sure feels like I’m done. And like every ultra I’ve finished, while I’m glad to be done, I’m especially glad to have done it.

Was it Worth It?

I really saw the country, for the first time. I connected in person with so many online friends I’ve made in the four and a half years I’ve been blogging. And I introduced a lot of new people to No Meat Athlete and to my new book, of which I’m extremely proud.

But if I’m honest with myself, the book tour came at a tremendous cost, in four areas that I can think of:

Despite all that … Yes, it was 100 percent worth it, without a doubt. Here’s why:

The Highlights (in Rough Chronological Order):

Of course, I’ve got to mention that there were so many more people and great experiences than these. To keep this highlight list relevant to you, I haven’t listed all the people I met and spent time with who don’t have an online presence and who you probably don’t know, but trust me, there were a lot of them. And the people were the best part of this trip: more than anything else, hearing their stories of the incredible changes they’ve made, due to running and especially eating a plant-based diet, is what kept me going.

How I Ran, Ate, and Slept

Running: There was RAGNAR DC, of course. Then a lot of the events were at running stores, and often we’d go for a 3-5 mile run as part of the event. On a few mornings in some cities, I went for runs with friends. Oddly, all of that happened during the first half of the tour, and I didn’t run at all during the second half, nor since I’ve been home. I’m itching to get back out there, but can’t easily get motivated without a big goal — I’m working on that.

Eating: I wrote a post that describes how I ate for the first half of the tour (the short version: Whole Foods, Chipotle, and lots of raw trail mix and fruit). Once I hit the west coast, I started going out to eat at restaurants a lot more often and had some amazing meals (some healthy, some not) with great people (all healthy).

Sleeping: I rarely booked a hotel more than a few hours in advance. Each afternoon when I got to a new city, I found a hotel on Trip Advisor, Hotwire, or the Hotel Tonight app and booked it. On the second half of the tour, when Matt Ruscigno and Doug were with me, we stayed with friends of Matt’s for a few nights in Phoenix and Austin, which was great. I stayed with relatives occasionally, and although I planned on doing some camping, I never did.

I’m still processing the whirlwind of events, and I suspect that the most valuable things I learned as a result of this expedition will be sub-conscious — improvements to my self-confidence (for planning, undertaking, and completing something so big), to my ability as a public speaker, and to my level of comfort in being the center of attention signing books, meet-and-greeting, and whom people come out to see. As an introvert and pretty shy person, these things do not come naturally to me, but one of the biggest lessons I learned from this book tour is that the way to become comfortable with an uncomfortable situation is simply to put yourself into that uncomfortable situation night after night. Which isn’t so different from the idea of creating accountability when you set big goals — it took only a few minutes to announce on my blog that I was going to do this book tour, and once I hit “Publish,” then I had to speak and mingle and sign books night after night … and after a week of doing these uncomfortable things, they became easy. And fun, even.

I learned also that I absolutely hate having a smartphone. I can’t wait to get rid of it after the remaining two events next week. I resisted the smartphone for a long time, but finally got an iPhone for this tour — for the maps, the hotel apps, the photos and social media updates, and the Square card swiper. I don’t deny that these things were essential for doing a tour like this in the world we now live in, but I think the fact that I resisted for so long gave me a good perspective. I noticed that with the phone I was distracted, frequently checking in on email, Twitter, and Facebook after each “real-world” activity, as if checking in on the phone was my center, my happy place, my set point that I needed to return to after each meal, talk, stop for gas, etc. I noticed that I’d get out my phone with the aim of doing one small task, then lose 20 minutes or even an hour accomplishing next to nothing, when in the past I’d have spent that time thinking and enjoying myself. No, a smartphone is not for me.

I learned that by default I’m an optimizer, when often it’s better to be a satisficer. I first learned about the concept from the Happiness Project, but didn’t apply it until this tour. Example: at first, it took me a really long time to choose hotels. I would find one that seemed decent, then keep looking for a better option, to be sure that I made the best choice possible (optimizing). But after I realized how much time, stress, and second-guessing this required, I started just picking the first one that met my needs (satisficing). Believe it or not, it was hard to get myself to do this, but just seconds after the satisficing decision was made, I felt better for it. I’ve noticed this phenomenon in a lot of other areas of my life (restaurant menus are an obvious example, assuming you’re at a restaurant where there’s more than one option for you), and I’m happier as a result of satisficing more often.

And finally, I learned that all of *this* matters. I met so many people who enthusiastically shared their stories with me — stories that involved dramatic weight loss, health improvements, the discovery of a compassionate side, and the conquering of (or sometimes, the commitment to conquer) an utterly ridiculous, unreasonable goal and all the self-discovery that entails. And as a result, when I have those moments where I ask myself, “Does this silly blogging thing really matter?”, I’ll have this experience to back up the belief that yes, it absolutely does.

Not in any particular order. If you’ve got some good ones from an event you attended, please share it with me on Facebook so I can have a big collection! 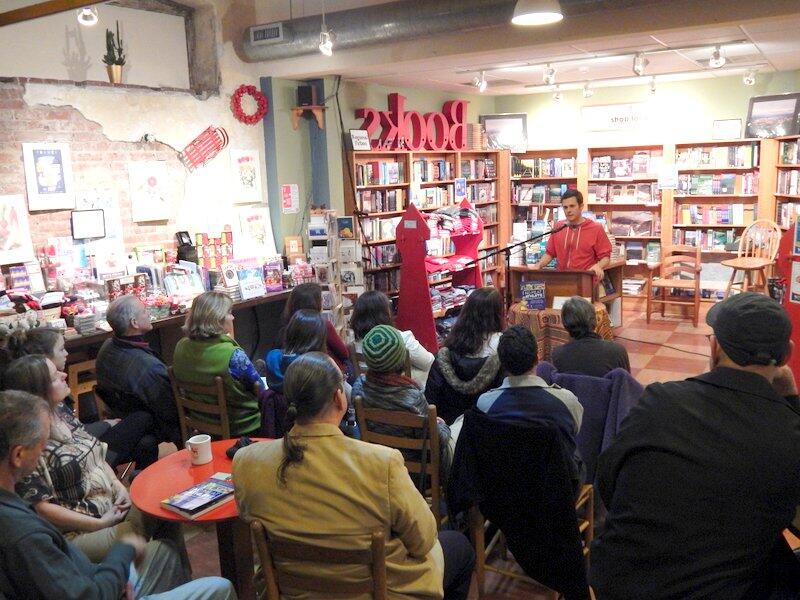 Malaprops in Asheville, my “hometown” event. At Life Alive Cafe in Boston on the day of the book’s release. With Tom Giammalvo and his cousin Mike in Boston. With my little girl in Seattle. At the Ann Arbor District Library With JL Fields in Colorado Springs! Sid Garza-Hillman speaking before me at Whole Foods Oakland. At the top of The Incline in Colorado Springs with Dave Burgess. That Pacific coast I mentioned. With TJ Ernst, who helped make the Omaha event happen My little guy in the Asheville Barnes and Noble — this text brightened my day from across the country. With my buddy Erin A.M.G. at the Chicago Diner, post-marathon (for her). Not exactly the World’s Biggest Ball of Yarn, but … 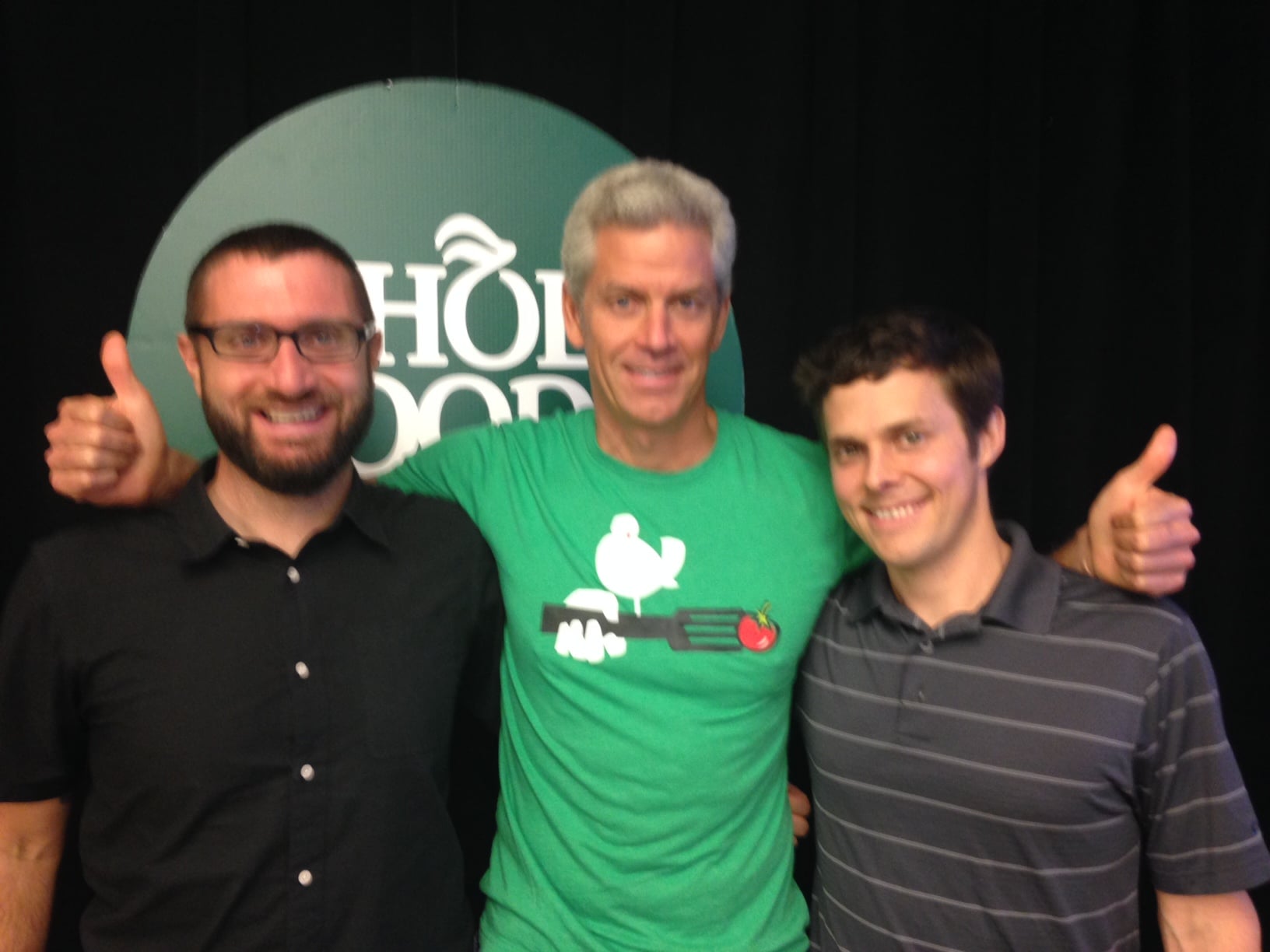 With co-author Matt Ruscigno and Rip Esselstyn at Whole Foods HQ in Austin.

Fleet Feet Nashville, the last event before getting home to Asheville.

That’s it! Have a happy Thanksgiving, and look for a new podcast next week with a live recording from one of my talks — so that even if you couldn’t make it out to an event, you can hear it.